The region of New Tecumseth has a vast history full of great opportunity and change. 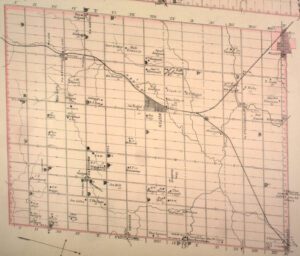 The earliest known pioneer journal for the area written by Richard Rorke in the early 1800’s gives us an insight into the beginnings of real estate in New Tec. Richards recounts that, along with 2 of his brothers, he purchased 6 lots of land for the moderate sum of 17 shillings and a sixpence for each lot. The average price being about 6 shillings per acre. In today’s currency Richard and his brothers would have paid less than $550. He makes mention of the fact that the township was quite new in 1820 and that there was probably only a dozen or so families in Tecumseth.

By 1837 the Tecumseth area had grown exponentially in numbers to over 300. And by 1881 there were over 5000 people in the township. Granted in 1984 the population was about 6500 but that is also during a time when we saw a lot more urban style homes that were all in proximity to one another. The late 1800’s would have seen large farming properties ranging from 50 to 200 acres of land.

Some forgotten communities include Tuam (pronounced twam), Clover Hill, Nicolston and Thompsonville. Tuam was located just Southeast of Tottenham with a post office on the Southeast corner of the 10th sideroad and the 3rd line that was built in 1863 and closed in 1914. Clover Hill was located west of Cookstown on Highway 89 between the 15th and 20th sideroads, a town that came to light in the 1850’s and died in the early 1900’s. Nicolston is still a name used today for the area just east of Alliston. While most of the township was situated North of 89 is Essa there were some that resided on the south side in Tecumseth. Now the area is recognized as the Nicolston Dam located West of the Nottawasaga Inn Resort. Like Nicolston, Thompsonville is a name that is recognized by most today. Located Between Tottenham Road and the 10th sideroad on the 13th Concession sits a small community that in the late 1800s had a sawmill, flour mill, church, hotel, post office and a small store. Now Thompsonville is a small residential and farmer community surrounded by fields.

Some older homes still exist in the area. Homes that date back pre-1850’s, but these homes are hard to date due to a lack of records. These homes can be given an estimated date within 10-15 years with the right type of research. Through examining the method or building, the moulding profiles, any original paint finishes as well as the general style of the house a general idea of date can be determined, so long as you can differentiate between original and later features. It is not necessary to have a specific year, so when you see “c. 1850”, then it was built between 1845 and 1855. Later homes are easier to date as the record keeping was better managed.

Congratulations, you made it to North York, and you just received the lot ticket for a 200-acre lot in the wild northern territory. It’s the summer of 1819 and you now must walk about 45km to get to the location of your newly owned property. After making it you find that the land is nothing but trees and on the location ticket it says that you have to clear and fence at least 5 acres for every 100 acres. So you best get to work clearing 10 acres of trees and brush as well as build your fencing and a home that is at least 16 feet by 20. Don’t forget that while you are doing this you should also be looking at clearing at least half of the road in front of your property and be sure to clear the rest within the next 2 years. All the while dealing with the harsh environment, wild animals and unknown and unforgiving land that you are going to call home.

We have it easy now. Even with the challenges that we face every day, I could not imagine living like that.

Learn from history, and appreciate what was done before to give us what we have.